Quebec’s labour shortage has acted as a sort of spur for the majority of business leaders, encouraging them to innovate and strategize new ways of assuaging—or outright preventing—any resultant slumps in the economy. The cruxes of the matter: thwarting critical issues, consolidating gains, and triggering growth. The most recent Governance Day—a Desjardins Capital initiative—fostered further exploration into efforts towards, and visions of, automation as conceived by Lyne Dubois (CRIQ), Jean Gaudreault (Garant), and Diane Trudel (Sanimax), notably in the manufacturing sector.

Where does Quebec rank?

“Studies indicate anywhere between 25% and 35% of Quebec businesses are automated, with overall automation circling the 50% mark at said establishments,” explains Lyne Dubois, Vice-President of Business Development at CRIQ (Centre de recherche industriel du Québec). So how is Quebec faring? “Compared to the rest of Canada and other industrialized nations, we’re lagging behind,” underscored the guest panelist. “The good news: Quebec is picking up the pace. For five years now, a great many companies have moved on from the awareness stage to implementation.” According to Dubois, there’s no need to fear an AI takeover, since automation is just one of several responses to the labour shortage.

“At Garant, fear is a great gauge,” is the irony-tinged response of the President Jean Gaudreault of Garant, the nearly 125-year-old crown jewel of the Montmagny region. “Think about it—we’re over here manufacturing shovels and we’re in competition with China!” adds Gaudreault, who employs 400 and delivers more than 11 million products every year. 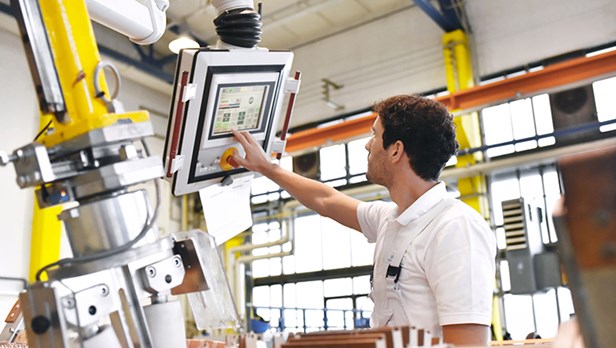 One (baby) step at a time

For Jean Gaudreault and his team, the little-by-little approach has proved to be most effective. “Automation doesn’t necessarily mean using giant robots like the ones you’ll find in car plants,” he explains. “We’ve made progress towards automation through testing, fostering a favourable learning environment, and most of all, by accepting right off the bat that failing better to better move forward is a fabulous recipe for success.”

As evidenced by its 2,500 employees and 17 locations in Canada, the United States, Colombia, and Brazil, Sanimax is a real-life Quebec success story. In operation since 1939, this environmental solutions provider for the agrifoods industry has front-row seats to actual automation outcomes.

Diane Trudel, another guest panelist at Governance Day and Director of Talent Development at Sanimax, shared her vision, “Will automation solve all our problems? No. A winning solution, however, lies in implementing a collaborative approach—with all our stakeholders—so we can benefit from a wider variety of perspectives.” Trudel believes that automation and retraining may trigger fear in some employees with several decades of seniority. Her remedy: “support, and most of all building trust.”

The future of labour

“If robots are democratic, user-friendly, and cheaper on an operational level, then automation is just the tip of the iceberg,” highlights Garant President Jean Gaudreault. “And if we’re focusing on innovation and production, distribution mustn’t be neglected either.”

All three expert panelists note that, instead of being a job killer, automation is all about creating novel, more interesting, and less repetitive employment, which is likely to attract more next-generation workers and women, in particular. CRIQ’s Lyne Dubois tells us that, “The battle for skilled labour is on, so an increasing number of companies are offering up more modern working environments to get them in the door.”

This new draw towards Industry 4.0 manufacturers could also help smash certain preconceived notions surrounding automation. “Actually, robotization has become a major appeal factor for the workforce. It allows us to give employees a more pleasant working environment, rather than confining them to annoying and repetitive tasks,” continues Dubois. By automating, she believes “we maximize human intelligence and creativity more than ever.”

Jean Gaudreault is convinced that the other ingredient to consider when upskilling employees comes in the form of a trust-empowerment synthesis. “You mustn’t be afraid of entrusting employees with projects and allowing them to leave the confines of their comfort zone.”

In the same vein, Diane Trudel reminds us that “People are more than robots. They want to learn. That empowers them, and in turn, makes them much happier people.” For Trudel, “Putting a bigger emphasis on approach and results—that’s what drives things forward.”