Are you at the helm of an innovative business?

We can help you

Founded in 2016
17 employees
Headquarters in Montreal

The expert who contributed to this success 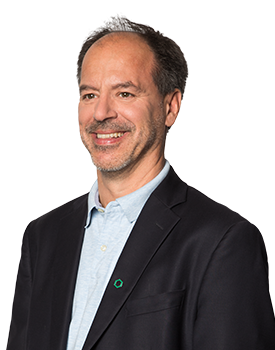 Starting an innovative business is exciting, especially when its primary goal is to contribute positively to society.

As an entrepreneur, you can recognize business opportunities related to new technology and innovation. However, financial and strategic support will be vital to fulfilling your vision and succeeding in business.

Spend to save... what a concept!

Philip Barrar is observant, ingenious and ambitious. This young entrepreneur has a mission to promote savings among his generation, namely millennials. This is not about giving them financial education classes or trying to convince them to contribute to an RRSP. Philip, an adopted Montrealer, wants them to save...by spending their money!

Moka, a start-up founded in 2016, has developed a mobile application that allows its users to save without thinking, simply by automatically rounding their personal purchases to the nearest dollar. With these micro-transactions, Moka can help them build an investment portfolio and achieve their financial goals.

Very soon, the company acquired Tactex Asset Management, a Canadian company managing its own investment funds, in which the money of these users was invested.

Officially launched in July 2017, the Moka application was immediately a huge success, which continues month after month.

[Background music: Classical music.]
[A smiling young woman bathes in a turquoise pond. The radiant sun shines on a white sand beach surrounded by a lush forest.]
[Background music: Upbeat instrumental music.]
Narrator: This is it. You finally get to experience your dream vacation. How did you get there? It all started with Mylo, the app that helps you save money by investing your small change.
[A cell phone slides into view on a wood table. The screen displays Mylo's logo.]
Narrator: That means Mylo helped you save money every time you bought coffee.
[A server smiles as she holds out a coffee. A hand extends and grabs it.]
[Text on screen: Café au lait, $3.25.]
[$0.75 is added to the cost of the coffee, making the total $4.00. The percentage of the objective reached displays at the top of the screen, passing from 11% to 12%.]
Narrator: Or treats for Mika for being a very good boy…
[A golden retriever chews a treat while lying on the grass.]
[Text on screen: Dog treats, $12.34.]
[$0.66 is added to the cost of the treats, making the total $13.00. The percentage of the objective reached passes from 79% to 80%.]
Narrator: Oh yes, who's a good boy? Who's...
[The dog recoils slightly.]
Narrator: Sorry.
[Aerial footage of Montreal's Old Port featuring its large Ferris wheel and the big tent of a circus.]
[Text on screen: Innovation designed to save money.]
[A young man stands in front of a bright window situated in a brick wall. He smiles as he rolls up his sleeves.]
Philip Barrar: Philip Barrar, CEO and co-founder of Mylo, Montreal region.
[Philip is interviewed in Mylo's Montreal offices, a vast, open-concept space with large windows.]
Philip Barrar: I definitely have my dad to thank for my entrepreneurial spirit. Growing up, he used to do patent commercialization for NASA and always embraced innovation and entrepreneurship in the household. So, when I saw the opportunity to build something with Mylo, I saw an opportunity to build something special.
[Philip walks through the office, pausing to speak with various colleagues.]
Philip Barrar: Not only are we building a profitable and sustainable company, but we're also making a positive impact on the world. We received an investment from Desjardins Capital only recently. So, we're at the beginning of our relationship, but it's already been fantastic.
[An employee navigates the application on a cell phone.]
Philip Barrar: We've been working with Roland and the management team. We've been receiving mentorship and guidance on how to build the company. We have learnt a lot, so they are helping us build a solid foundation and become one of the financial leaders in this space.
[Philip speaks to his team during a meeting. An employee examines graphics displayed on four monitors.]
Philip Barrar: There are many things that motivate me every day, but I'm very proud to say that our product's already making a difference. Just yesterday, a fourth-grade teacher actually used Mylo as an example in their class to help teach the rounding-up idea.
[A padlock appears in the centre of the Mylo logo displayed on a cell phone screen.]
[Text on screen: Bank security. 256-BIT encryption. Secure SSL connections.]
[The application changes to a screen with the header "Dream Vacation". A circular diagram indicates the percentage of the objective reached, while orange circles appear on the right displaying dollar amounts ranging from $5 to $20, as well as options for "other" and "X". The diagram passes from 96% to 100%.]
Philip Barrar: It's great to see that Mylo is already making an impact, and our users are telling us that for the first time in their lives, they're actually saving money and feel like it's finally possible to be able to achieve their financial goals.
[Philip and a woman stand and talk with two men seated in front of their computers.]
Philip Barrar: Being a successful entrepreneur is all about perseverance. When it comes to finding the right investor, it's hard work, and it's really rewarding when you find the right one, like we did with Desjardins Capital.
[In his office, Philip draws a graphic on a glass wall.]
Philip Barrar: The best advice I can give a young entrepreneur is never give up. Never give up. Continue to work towards achieving your dreams.

"To succeed in business, you must, first and foremost, persevere. You must also find the right investor. It takes lots of work, but it's rewarding when you succeed which was the case with Desjardins Capital." - Philip Barrar, President and Co-founder of Moka, 2017.

The challenges of starting an innovative business

Starting an innovative business in direct response to a market deficiency is very motivating, especially when it relies on a technological or industrial innovation that gives it a head-start in a growing market.

To make your innovative business a reality and success, the search for financing is often a question of survival for these potential start-ups. The funds these companies need to drive growth are the key to maintaining a competitive position in the market. Choosing a financial partner is a process that requires time.

But this is not the only challenge innovative start-ups face. There are many more: developing a winning strategy in the short and medium term, setting up an operational structure, managing cash flow and recruiting the right talent, to name just a few. Launching an innovative company means staying in "solution mode" every day. And as an entrepreneur, you know better than anyone what it takes! You know the real value of unwavering support by a team that's truly committed to the success of your business.

"We only recently received a financial contribution from Desjardins Capital, so we are at the beginning of our relationship, but it's already great. We work with Roland Léger, our investment manager, and the management team. They guide us, providing advice on how to build the business. We have learned a lot. And I sincerely believe that what we learnt can help us build a strong foundation for becoming a leader in the financial sector." - Philip Barrar, President & Co-Founder of Moka

Thinking of starting an innovative business

Talk to an investment manager in your region